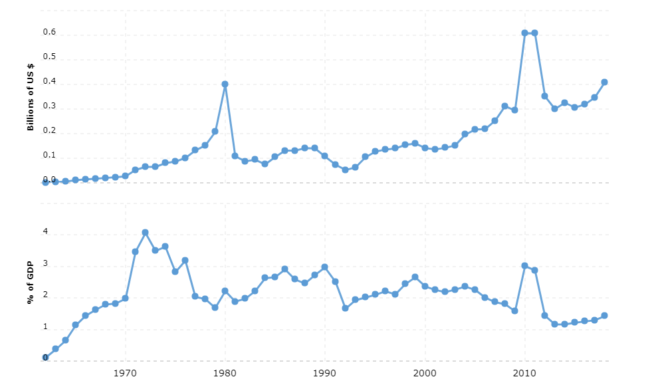 Since 2007, Uganda has troops in Somalia to support the government there and fight the militant Islamist group al-Shabaab. Ugandan soldiers form the backbone of Amisom, the peacekeeping force of the African Union (AU) in Somalia. Since al-Shabaab carried out two suicide attacks in Kampala in 2010, the Ugandan security service and the United States have warned of the risk of new attacks in the country. In 2019, Uganda had 6,400 soldiers in Somalia.

Uganda has long had a difficult relationship with the Government of Sudan, not least because of its close contacts with the guerrilla movement SPLA, which fought for an independent southern Sudan. Sudan has long provided LRA with both protection and support while Uganda did the same for SPLA. In 1999, Sudan and Uganda signed an agreement in which the countries pledged to end support for each other’s opposition groups.

Since South Sudan gained independence in 2011, the country became an important trading partner for Uganda. When civil war broke out in South Sudan in late 2013, Uganda sent soldiers there to support the government side. The decision to send soldiers to the neighboring country was only subsequently approved by the Ugandan parliament. President Museveni initially described it as a humanitarian effort to prevent a genocide, but it has been found that Ugandan soldiers helped President Salva Kiir Mayardit recover cities and oil fields from the rebel side. In 2014, Museveni promised to withdraw the Ugandan troops, but they were only withdrawn in November 2015, in accordance with a peace agreement in South Sudan. In February 2019, there were almost 800,000 South Sudanese refugees in Uganda.

The three former British colonies Kenya, Tanzania and Uganda had close political and economic ties even before independence in the early 1960s. From 1967, cooperation took place within the framework of the East African Community (EAC). But political contradictions grew strong during the 1970s. EAC stopped working and several border conflicts took place.

Contacts improved gradually and in 2001 EAC formally resurfaced. In 2007, Rwanda and Burundi also joined. In 2016, South Sudan also joined the community. The EAC’s goal is to strengthen political cooperation between the countries, increase regional trade and reduce dependence on foreign aid. A free trade agreement entered into force in 2005 and since 2010, labor and capital can freely move across borders. The goal is to eventually introduce a single currency and form a political federation. In April 2017, the countries agreed to form a Customs Union, which came into force three months later. Prior to this, Kenya, Rwanda, Tanzania and Uganda had started to exchange national passports with EAC passports.

The relationship between Uganda and Rwanda has fluctuated tremendously since the early 1990s. Many of Rwanda’s new holders of power after the 1994 genocide were old gunmen to Museveni. Relations deteriorated during the war in Congo-Kinshasa 1998-2000 due to competition for Congolese natural wealth (see below). In 1999, regular fighting broke out between Ugandan and Rwandan troops in eastern Congo-Kinshasa. After that, the relationship improved, not least through Uganda’s support for Rwanda’s membership in the EAC. From 2017, tensions increased again as Rwanda claimed that Uganda supported a Rwandan rebel group that aimed to overthrow the Kigali government, something the Ugandan government rejected. Uganda also accused Rwanda of interfering in Ugandan affairs (see also Calendar).

Uganda’s relations with Kenya and Tanzania have been strengthened since the countries resumed cooperation within the EAC in the late 1990s. One sign that Uganda and Kenya were approaching each other was President Museveni’s harsh criticism of the ICC’s charges against Kenya’s president for abuses committed in the 2007 Kenyan elections.

Uganda was involved in conflicts in Congo-Kinshasa from the mid-1990s. The motives were both the need to secure the border with the neighboring country and the snow. Ugandan rebel groups emerged from the Congolese territory in the early 1990s. Uganda supported Congolese guerrilla leader Laurent Kabila in defeating the then dictator Mobutu Sese Seko in 1997. When it emerged that Kabila did not prevent the Ugandan rebels from operating from Congo-Kinshasa, in 1998 Uganda chose to support attempts to overthrow Kabila. At the same time, Ugandans, not least high-ranking soldiers, plundered Congo’s rich natural resources. Uganda received sharp criticism from the outside world for its actions, especially the looting of natural wealth and participation in abuses against civilians. Uganda’s troops were withdrawn in 2003 following a peace agreement in Congo-Kinshasa,

The countries also have a dispute over areas around the Albertsjön, where large deposits of oil have been discovered. At the same time, trade between Uganda and eastern Congo-Kinshasa has gained momentum.

In a 2012 UN report, Uganda (and Rwanda) was accused of supporting the Congolese rebel movement M23. In connection with the country threatened to leave all its peacekeeping missions, including that in Somalia, but this did not happen. Concerns that the tense situation in the region would affect the planned oil recovery at the Albertsjön are considered to have played an important role (see Natural Resources and Energy).

In recent years, China has increased its influence in Uganda and is active in almost every economic sector in the country. Western donors’ markings against Uganda due to corruption charges and the harsh attitude towards gays have contributed to Uganda increasing its cooperation with China (see also Economic overview).

In recent years, contacts between Uganda and Russia have increased. In 2011, Uganda bought Russian fighter aircraft for $ 744 million. In 2015, Uganda signed an agreement with a Russian company to build a large oil refinery near Kampala.

Uganda is one of America’s closest allies in Africa and receives extensive US aid and military support. Although the United States marked its disapproval in 2014 with the new legislation against homosexuals, Uganda is an all too important ally for Washington to do more than that. Through the operation in Somalia, the Ugandan military has been able to gain goodwill and to receive money from the United States for new equipment and training of the soldiers.

Uganda has a large army. In 1990, the defense budget corresponded to 30 percent of gross domestic product (GDP), but later the proportion decreased significantly. However, it is unclear how much the military effort in South Sudan will cost Uganda.

The rebels blame the government for murder

LRA rebels kill hundreds of people in three Congolese villages. The LRA denies any involvement in the killing and claims to have been committed by the Ugandan army. The LRA is also accused of killing 38 people in southern Sudan.

Uganda, self-governing South Sudan and Congo-Kinshasa launch a military offensive against the LRA in northeastern Uganda. According to the Ugandan military, several LRA bases are destroyed. When there is evidence that military forces from South Sudan are participating in the attacks, a representative of the LRA says the raids are likely to mean the end of the peace process. The Ugandan government claims that more than two-thirds of LRA’s camps have been destroyed.

In November, the LRA leader again announces that he will sign the peace agreement, but just as before, Kony does not show up for the ceremony.

Rebels are suspected of kidnapping

According to relief organizations, the LRA is suspected of kidnapping civilians in the Central African Republic. Reports indicate that LRA rebels are still active in Congo-Kinshasa and in South Sudan, where they are suspected of brutal attacks against the civilian population.

A final peace agreement is signed

The final peace agreement between the government and the LRA is scheduled to be signed on April 5. However, it was postponed several times because Kony did not come to Ri-Kwangba as planned.

During the 18 months that peace talks have been going on, the violence in northern Uganda has decreased significantly and some refugees have begun to return home.

The president does not intend to hand out guerrilla leaders

President Museveni says he does not intend to hand over the LRA leaders to the ICC, but should instead be tried by the traditional Ugandan judiciary (which places more emphasis on asking for forgiveness and damages than penalties). However, the ICC claims that the charges against the LRA leaders (two of whom are now dead) remain.

Threats from the guerrillas

The victims of the conflict should be compensated

The parties have also agreed that a special unit at Uganda’s High Court should deal with those accused of serious crimes. Programs will also be started to offer victims compensation, a kind of truth commission to investigate what happened during the conflict, and other measures to facilitate reconciliation.

Earlier, the parties agreed that representatives of the population in conflict-affected areas should be given high political and diplomatic positions and that LRA rebels should be integrated into the national army.

Agreement on a permanent cease-fire

On February 24, the government and the LRA sign an agreement on a permanent ceasefire. It also means that the rebel movement undertakes not to recruit any combatants or acquire new weapons, and that a buffer zone of a mile should be established around LRA’s Ri-Kwang-Ba collection camp in southern Sudan.

At the beginning of the year, a group from the LRA travels to war-affected areas asking victims for forgiveness for their part of the conflict.