Empress Elisabeth of Austria, world famous as Sisi, loved this Mediterranean island very much. The second largest of the Ionian Islands is at the height of the southern tip of Italy. Only a narrow strait separates Corfu from Albania and also from mainland Greece.

About four million olive trees grow on the island. Therefore, even in the strongest summer heat, it is green and not bare and barren, as one might assume. The climatic conditions are pleasant even in midsummer. During a holiday in Corfu, you will find beautiful beaches, picturesque, romantic bays, but also remote mountain villages. In the capital Kérkyra you can stroll through the historic old town and enjoy a little of the Italian flair.

Lovers of party and nightlife will not miss out either. Of course, culinary experiences should not be missing either. The Corfiots are very hospitable and delicious dishes are served in traditional taverns. Corfu offers something for every taste, including sights of course.

In the following we present you the most exciting tours, most beautiful attractions and best sights in Corfu. 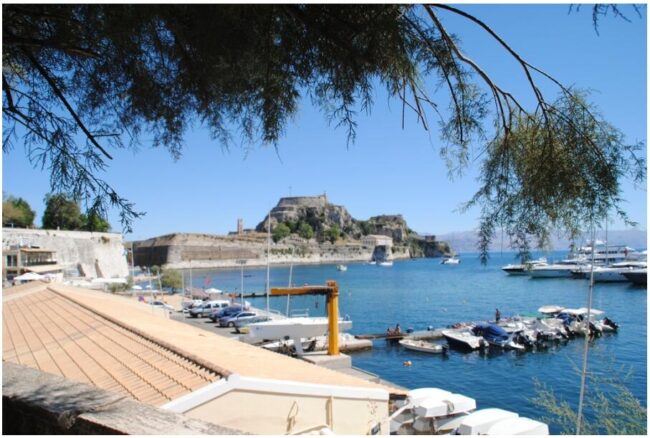 The historic old town of Kérkyra (Corfu Town) is a World Heritage Site and one of the most beautiful metropolises in the Mediterranean. It is a city where Italian history can be felt. The city combines the present and the past, a city full of contrasts and lots of flair. Corfu Town is lively and offers a delightful mix of historical sights and modern times.

The city is largely free of cars. Old, narrow, cobbled streets, arcades, small shops, nice cafes and bars, taverns that offer Corfiot dishes, all of this merges into a bustle. In summer there is often a lot of hustle and bustle, among other things due to the tourists who also come with cruise ships and land in this wonderful metropolis.

Esplanáda is located between the old town and the old fortress. This spacious square, which now serves as a park, was a parade ground under British rule. You can feel a lot of influences from the British protectorate here. Behind the Esplanáda begins the oldest part of the old town, the Kambiello, which was built at the beginning of the 14th century. A labyrinth of winding streets, small squares and arches can really inspire you.

This castle, located about seven kilometers south of Kérkyra in the small town of Gastrouri, is one of the most visited attractions on the island. It is known as “Sisi Castle” because it was commissioned by Sisi, the Austrian Empress Elisabeth, in the years 1889-1891. She loved Greek mythology and adored Achilles, the Greek hero. In his honor she had the sculpture “Dying Achilles” made, which can be seen in the palace gardens.

The later owner of the castle, Kaiser Wilhelm II, had the “victorious Achilles” set up on the hill of the castle park as a counterpart. From the beautiful garden you have a wonderful view of the sea. The empress spent a lot of time in this magnificent castle until her death. Later it was bought from the heirs by Kaiser Wilhelm II. Among other things, it was a military hospital, a base for German occupiers and is now a public museum.

If you are lucky enough to have a window seat on the plane, you can already admire this sight when approaching Corfu. The motif adorns almost every Corfu postcard. The popular destination is on Cape Kanoni, a peninsula with the same name, and is about five kilometers from Kérkyra. The island is only around 100 by 100 meters small.

According to Greek mythology, the island is said to have originated from a Phäak ship that Poseidon, the Greek god of the sea, is said to have turned into stone. The small island can be reached via a narrow footbridge. There is the Vlachérna monastery from the 17th century. The inner courtyard is worth seeing and in the tiny one-room chapel you can see icons and many beautiful, well-preserved wall paintings.

Corfu’s capital is bounded by two fortifications. To the east is the Old Fortress, which is the city’s landmark. The imposing bulwark was built by the Venetians in the 16th century. It is separated from the city by a seawater canal that was dug to secure the fortress. Many buildings under British rule were erected within the walls, such as the church of Agios Geórgios. The garrison church resembles a temple in the Doric style.

In front of the entrance to the fortress is the imposing monument to Matthias Johann Freiherr von der Schulenburg. The German, who lived from 1661 to 1747, was in the service of Venice. He was a gifted strategist who was supposed to defend Corfu against the Turks. He succeeded. In addition, Saint Spiridon is said to have appeared to the besiegers during the night. The Turks then fled in a panic. The Corfiots revere the imperial count von der Schulenburg to this day. From the highest point of the fortress, visitors enjoy a magnificent view and there are great photo opportunities.

The New Fortress was also built under Venetian rule in the 16th century. It was supposed to protect the city from the northwest. It is said to have been connected to the old fortress by underground passages, which cannot be visited. The new fortress of Corfu is one of the most beautiful sights in Corfu.

With the wonderful view of the old harbor and the old town as well as the opportunity to watch very low-flying planes approaching, visitors are rewarded for climbing the steep stairs. When the weather is nice and clear, it is even possible to look as far as Albania and also to see mainland Greece. Exhibitions and various concerts take place in the New Fortress. 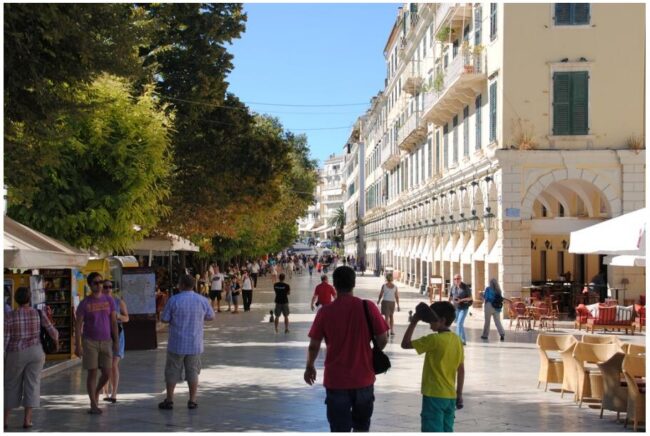 In the castle there is a museum with archaeological finds, historical documents and information about the island’s botany. The enchanting castle was the summer residence of British governors. Prince Philip, Duke of Edinburgh, husband of the British Queen, was born here in 1921. The park, in which the remains of two ancient temples are located, is also worth seeing.

Saint Spiridon was a bishop and is the patron saint of the island of Corfu. According to legend, he was born in Cyprus in 270 AD and his body is said to have been brought to Corfu by a priest. The island’s saint is kept in a side chapel of the church with the striking bell tower, near the Esplanáda, and can be viewed and venerated there.

Spiridon is carried through the city four times a year. Once a year he gets new shoes because the old ones are broken by his nightly walks in the city. Inside the church you can see precious incense vessels, candelabra, as well as magnificent ceiling paintings and icons.

This neoclassical palace stands at the northern end of the Esplanáda and is the only building in the Mediterranean basin built in the style of King George IV. The building was the summer palace of the Greek royal family from 1846 to 1913.

Today the castle houses the Museum of Asian Art as well as an art gallery in which mainly works by Corfiot painters from the 19th and 20th centuries are exhibited. From the shady, small park there is a wonderful view of a headland with a chapel, the Faliráki complex.

There are of course also places of interest outside the island’s capital. The fortress Angelokastro, the Castel Sant’Angelo, is one of them. The fortress was built in the 13th century under the rule of Michael Angelos as the base of an Orthodox Greek principality. The rocks, which are up to 160 meters high, are enclosed by the sea and are only connected to the mainland by a narrow path.

In the northwest of the island is the small town of Krini. From there a footpath leads to the Byzantine fortress, which lies high above the famous bay of Paleokastritsa. One of the most beautiful panoramic views of Corfu awaits the visitor there.

A natural attraction is the Pantokrator, the highest mountain on the island of Corfu with a height of 906 meters. The mountain is also called the “ruler of all” by the island’s inhabitants. Violent civil wars took place here in the 5th century. At the top is the Ypsilós Pantokrátoras monastery.

It was built around 1374 by residents of the surrounding villages, later destroyed by the Turks and rebuilt in 1689. In the monastery church, the consecration is celebrated every year on August 6th and many pilgrims visit the monastery. 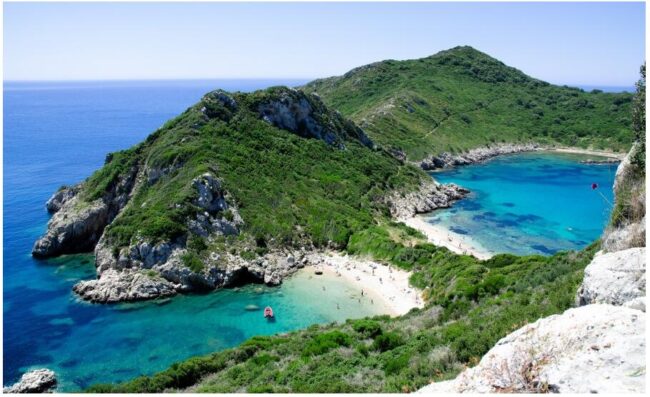