The plants of Australia have a unique diversity and are listed as an independent “flora australis”. A high proportion of the plant species and genera is endemic and only occurs Down Under. About 20,000 species of seed plants alone are known. A not inconsiderable part of the Australian flora is considered to be unexplored and is still waiting to be discovered and classified. In the course of their evolution, the plants have adapted perfectly to the nutrient-poor soils of the continent. The species-richest genera eucalyptus and acacia shape a large part of the flora, while the dry areas are dominated by grasslands (especially with the genera Triodia and Astrebla). The rainforests are small in area, but very species-rich.

The vegetation of the 5th continent can be divided into different vegetation groups. These are based on the characteristics of the way of life and the height of the highest vegetation layer and its ground cover. According to a more recent structure, floristic aspects are also taken into account. The main vegetation groups of the flora of Australia are closed forests, open forests, woodlands, shrub vegetation and grasslands. They can be subdivided in more detail into the formations rainforests (divided into Northern Rainforests and Southern Rainforests), High Open Forests, Open Eucalyptus Forests, Tropical Eucalyptus Woodlands, Woodlands, Eucalyptus Woodlands, Melaleuca Woodlands, Other Woodlands, Acacia Formations (subdivided in the areas of Northeast, South, Central and West Australia), Mallee, Heiden, Chenopodiaceae bushes, grasslands,

Eucalyptus: The most common tree

The eucalyptus (gumtree) is the most widespread plant in Australia with a tree population of up to 70 percent and around 850 different species. The evergreen shrubs and trees belong to the myrtle family (Myrtaceae). Almost all eucalyptus species are very hardwood and fast growing. With a height of over 90 meters, the Karri eucalyptus is one of the tallest trees in the world. For koalas and some marsupials, the eucalyptus is used as a food crop, while it is poisonous for most other animals and plants. Due to its rapid growth and the good quality of wood, the eucalyptus is also grown in plantations in other parts of the world. However, this often has negative ecological consequences. Eucalyptus dry out the soil, displacing the natural flora and fauna and promote forest fires. In addition to wood extraction, the essential eucalyptus oil is primarily used commercially.

Acacia: a defining part of the flora

The acacias are assigned to the mimosa family and, with up to 1,000 species, are among the most species-rich plants in Australia. They are a defining part of the vegetation, especially in the arid and semi-arid areas. The deciduous trees and bushes usually shed their leaves in the dry season. In many acacia species, flattened petioles (the phyllodes) take over photosynthesis. Acacias can form nitrogen nodules on the roots and are therefore able to live in soils that are poor in nitrogen. Acacias have developed a special protection against predators. In the event of danger, they release ethylene into the air. The surrounding plants react to the ethylene by increasing the tannin content in the leaves.

The approx. 28 species of grass trees (Xanthorrhoea) only occur on the 5th continent and on Tanzania. They are probably the most unusual representatives of the flora of Australia. In English they are also known under the names Yacca, Blackboy or Grasstree. The grass tree is an evergreen, xerophytic plant. Many grass tree species form an occasionally less branched, woody trunk over the years. Grass trees can reach an enormously old age. Specimens with an age of 600 years have been proven. The height of the grass tree is about two to six meters. A distinctive feature is an anomalous secondary growth in thickness through a single cambium ring. The grass tree is counted among the pyrophytes because fire promotes its spread and reproduction.

The flora of Australia has been endangered since European colonization began in 1788. Due to the increasingly intensive agriculture (mainly livestock farming), large areas of the land were cleared to make room for arable land and pasture. Every year the natural vegetation is cleared around 600,000 hectares. Today, over 60 percent of the total land area is used for agriculture. In addition to agriculture, the invasive plants introduced by settlement represent a particular threat. Around 220 plants are considered to be among the aggressive species that displace the natural, original vegetation. In order to protect the Australian flora from endangerment, different types of protected areas, such as national parks, wildlife reserves, fauna sanctuaries, nature reserves, Conservation Parks, Flora Reserves and Forest Reserves introduced. Despite these measures, the fatal clearing outweighs the regrowth because the government only accepts protected areas in economically insignificant areas. 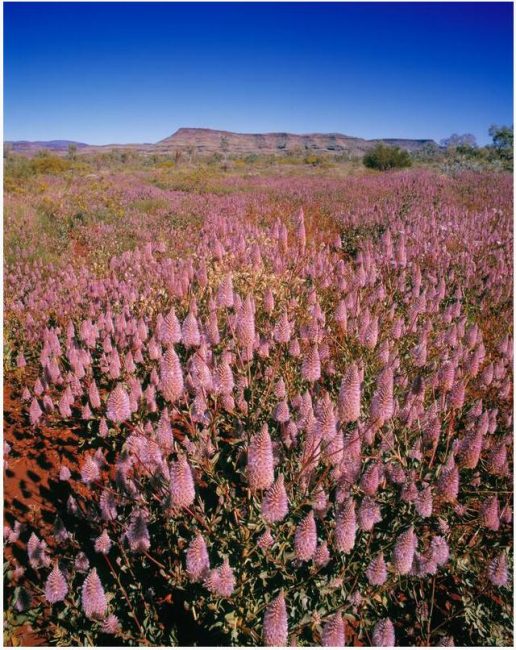