Guinea-Bissau is a nation in Western Africa. Its capital city is Bissau. Guinea-Bissau’s foreign policy is greatly affected by the country’s need to stay well with foreign aid donors. The EU, various UN agencies and several European countries, especially the old colonial power Portugal, have long been among the most important donors. In recent years, however, contacts with China, Angola and Brazil have increased in importance. 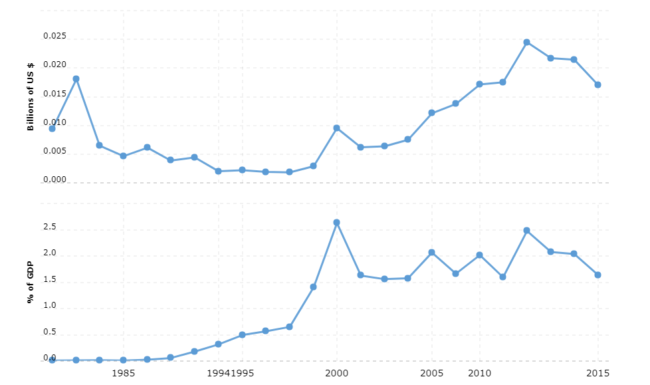 Relations with Portugal have generally been good, which is reflected in, among other things, extensive trade between the countries. However, contacts deteriorated after the coup in spring 2012 but have since normalized.

The EU has provided extensive support to the country, but several times, often in connection with military coups or other unrest, parts of the aid have been withdrawn. In conjunction with the 2012 coup, the EU also introduced travel bans for several of the coup leaders who also had their assets frozen.
The EU and other major donors resumed their support for the country in 2014 after the democratically elected government took office.

China was one of the few donor countries that chose to cooperate with the junta, despite condemning the coup. China has, among other things, built and funded a military hospital, new government buildings and schools.

Brazil, which has, among other things, provided support for agricultural development and training of police officers, on the other hand, held a firm line against the military authorities. Trade between the countries has also gained momentum in recent years.

From 2007, Angola has been one of the country’s largest bilateral donors. In 2011, Angola promised, among other things, $ 30 million for defense reform (see below). According to some sources, this was part of Angola’s quest to strengthen its influence in the region, but there were also suspicions that representatives of the Angolan government were taking advantage of the situation to launder black money.

In the past, the country has also received financial support from Libya. In September 2011, Prime Minister Gomes promised that Libyan leader Muammar Gaddafi would get Guinea-Bissau political asylum in a situation when no other country seemed prepared to accept him.

The separatist movement MFDC’s armed struggle in the Casamance region of southern Senegal, which began in the early 1980s, has created tensions between Guinea-Bissau and Senegal. The MFDC has historical and ethnic ties to Guinea-Bissau and Senegal has long accused the neighboring country of allowing the MFDC to operate from its territory, something the Bissau government denied. The government’s intervention on the government side in the Guinean civil war was unpopular among the Guineans (see Modern History). In 2000, the countries signed an agreement on joint border patrol to avoid incidents, but in 2004 and 2006 there were conflicts between factions of the MFDC and the Guinean government army. In 2006, hundreds of Guinean soldiers and an unknown number of rebels were killed and about 10,000 Guineans fled to Senegal.

Previously, a dispute between Guinea-Bissau and Senegal was ongoing as to where the sea boundary between the countries would go, which was also brought to light by any oil deposits that existed in the area, but it is now resolved.

In the early 2000s, contacts with the Gambia also intensified. Former Guinean President Kumba Yalá then accused Gambia of being involved in a coup attempt against him in 2002, which was rejected by Gambian leader Yahya Jammeh. For a while, Yalá threatened to invade the Gambia, which according to him entertained supporters of former coup leader General Mané and separatists from Senegal.

The West African cooperation organization Ecowas played an important role in establishing a peace settlement during the civil war, but has also mediated in subsequent domestic political conflicts. However, Nigeria has been criticized for passivity after the 2012 coup, which prevented Ecowas from acting more forcefully. The rivalry between Nigeria and Angola over influence in the region was then considered to have been recorded.

Contact with Guinea was strained by the neighboring country sending troops to Vieira’s defense in 1998, but relations appeared to have normalized later.

After the 1980 coup, the relationship with Cape Verde was tense, but has since gradually improved.

Guinea-Bissau also belongs to the Portuguese-speaking countries’ organization CPLP, which was formed in 1996, which is supposed to be a counterpart to the Commonwealth. Consists of Portugal and its former colonies – Guinea-Bissau, Cape Verde, Brazil, Mozambique, São Tomé and Principe and from 2002 East Timor.

Since the spring of 1999, the UN has an office, Unogbis (from 2010 Uniogbis), in Bissau, which through various measures will try to promote democracy and peaceful development in the country.

The UN Drugs and Crime Office, Undoc, has also launched a project in the country to help the government fight drug trafficking.

Following the April 2012 coup, Guinea-Bissau was temporarily suspended from the African Union (AU). However, the country was able to re-enter the organization after the May 2014 presidential election.

The police force is responsible for security within the country, while the military must deal with external threats. About a quarter of the state budget is estimated to go to the defense. Since many soldiers were promoted in connection with coups and various revolts, the proportion of officers is unusually high.

Plans for major cuts in the armed forces were an important factor behind both the civil war and subsequent unrest. The fact that some militaries can earn large sums from working for the cartels smuggling drugs via Guinea-Bissau, while others hardly have any money at all is considered to have contributed to tensions within the armed forces.

Several donors at the beginning of the 1990s demanded a defense reform as a condition for continued financial support. One of these was also initiated and the intention is that the defense forces should lose weight considerably.

In August 2016, Ecowas signaled that the troop force, Ecomib, the organization had held in the country since 2012, with the mission of protecting leading people and important institutions, is likely to be withdrawn within the coming year. In the meantime, a domestic troop force must be trained to take over responsibility from them.

People arrested in connection with drug seizures are reported to have been released following pressure from the military.

Removal of large amount of cocaine

674 kilos of cocaine stored in the Ministry of Finance’s premises disappear. According to Prime Minister Aristides Gomes, the drug has been burnt, but there is no evidence that it really happened.