According to abbreviationfinder, Chad is a nation in Central Africa. Its capital city is N’Djamena. Chad has strong ties to the former colonial power of France. For Chad, France is also an important donor and the country’s most important trading partner. 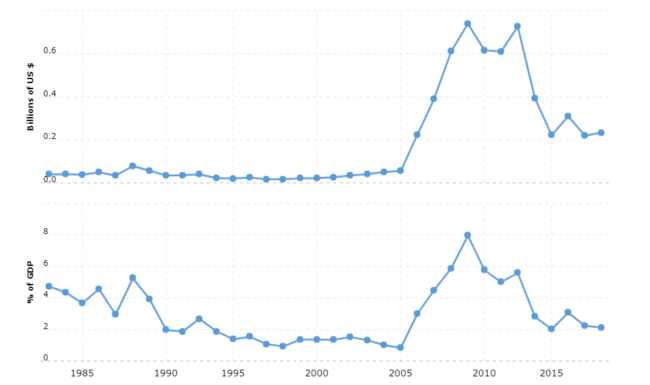 France’s interests in Chad are primarily of a strategic nature. Since 1986, France has had a military force stationed in the country in order to protect French interests in the region. In Chad, France also has the opportunity to train its soldiers for other missions, and here France has set up an organization to monitor terrorism in the Sahara region. France has also several times helped Déby to ward off rebel attacks.

In early 2013, Chad sent soldiers to help France push back a coalition of Islamists who invaded northern Mali. The Chadian soldiers benefited greatly from their wilderness warfare and President Déby was able to strengthen the image of himself as a stabilizing force in the region. Since then, military cooperation with France has deepened. France has increased the number of soldiers in Chad and also provided the country with new equipment in the form of fighter planes and drones.

The relationship with the United States is good. The United States provides military support to Chad to prevent terrorist groups from operating in the region, notably al-Qaeda in the Islamic Maghreb (Aqim) and Boko Haram (see below). US companies are involved in the oil industry and the US buys most of the Chadian oil.

From 1977, Chad maintained diplomatic relations with Taiwan in exchange for financial aid, but Taiwan was eventually out-competed by China in both countries’ struggle to gain recognition from the world’s states. In 2006, Chad was persuaded by Beijing to cut ties with Taipei, and instead establish diplomatic relations with China. Since then, China has invested in the oil industry in Chad. China has among other things built the country’s first refinery in Djermaya north of N’Djamena. China has also been involved in various infrastructure projects. In recent years, however, relations have been marked by a dispute between the government of Chad and the Chinese oil company CNPC. The refinery has several times been shut down by the Chad authorities who complained that the price of its products was too high.

Sudan supported Déby’s takeover of power in 1990 and during the 1990s relations remained good. When the armed uprising against Khartoum broke out in Darfur in Sudan in 2003, relations became complicated. Debby’s attempt to support the Sudanese government against the rebels was complicated by the fact that his own zagawa people group is also in Darfur. Chad’s army was reluctant to fight against members of its own people and the Chadian effort became weak. This prompted the government in Sudan to eventually start supporting the Chadian rebel groups in their fight against the Déby government. One gave the other and soon the countries were involved in a low-intensity war led by the rebel movements on both sides of the border. Sudan supported rebels in eastern Chad (see Modern History) while Déby entertained the rebels in Darfur.

During the hostilities, Sudan and Chad each year signed at least one agreement on cooperation and peaceful relations without improving the situation. In 2008, Sudan accused Chad of supporting a rebel attack against a suburb of Khartoum and severing diplomatic relations with N’Djamena.

The following years, a process of reconciliation was initiated under pressure from the outside world. In February 2010, Chad and Sudan signed an agreement to normalize their relations and open the common border for regular traffic for the first time since 2003. A joint force was established to patrol the border and the countries agreed to stop supporting the other side’s rebels. Then followed a wave of expulsions of rebel leaders and guerrillas from both sides.

For the government of Chad, it is important to have good relations with the neighboring Central African Republic in the south in order to maintain stability in the border area near the oil pipeline transporting oil from Chad to a port city in Cameroon. Chad backed François Bozizé, who took power in the Central African Republic in 2003. When Bozizé was threatened by rebel alliance Séléka in late 2012, Chad sent troops to the neighboring country to protect Bozizé, who was, however, fleeing. After the change of power, Chad became involved in the peacekeeping force deployed in the Central African Republic to try to end the civil war. However, in the spring of 2014, Chad withdrew its forces, which were accused of violating human rights during their service.

Chad’s relations with Libya have also been complicated. The countries had previously disputed the border area of ​​the Aozour Strip where there is likely to be uranium. Libya occupied the area in 1973. Following a peace agreement in 1989, the two countries handed over the issue of Aozou to the International Court of Justice in The Hague, which in 1994 ruled in favor of Chad. Libya withdrew its troops. During the Libyan civil war in 2011, Chadian officers were accused of helping Libyan leader Gaddafi quell the uprising against the regime, and a number of Chadians were executed by the Libyan rebels, which led to protests from Chad. Before the crisis, some 300,000 Chadians lived in Libya. During the war, some of them returned home accompanied by Libyan refugees, which increased the pressure on the villages south of the border.

Together with Burkina Faso, Mauritania, Mali and Niger, Chad formed in 2014 an organization named G5 Sahel. Its purpose is to strengthen cooperation on development and security in the Sahel region. The headquarters were located in Mauritania’s capital Nouakchott.

Since 2015, Chad has been working with Nigeria, Niger, Benin and Cameroon to fight back the brutal Islamist movement Boko Haram, which has its base in Nigeria but also raids neighboring countries where they kidnap and kill civilians. Chad has sent troops to northern Nigeria to help the Nigerian army chase the terrorists. The cooperation is supported by both France and the United States.

Chad is also a member of the regional Customs and Currency Union, Cemac (Community Economic and Monetary de l’Afrique centrale). The Cemac countries’ currency is the CFA franc (Central African Franc), which has a fixed exchange rate against the euro.

The military has great influence over Chadian politics.

Since 1983, French troops have been stationed in the country. The United States provides advice, clothing and equipment.