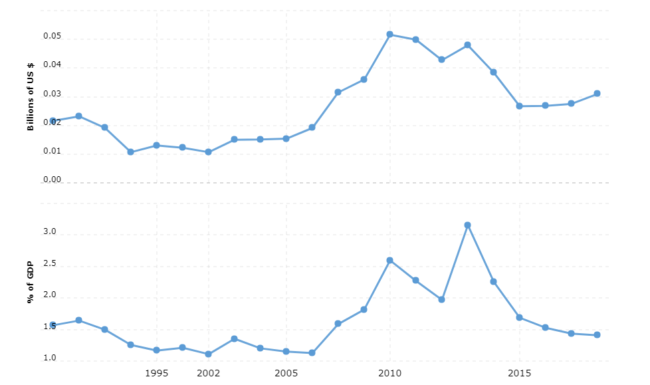 Even when it comes to a broader international commitment to the Central African Republic, France plays an important role. For example, French soldiers made up the bulk of the EU force, Eufor Chad/RCA deployed in eastern Chad and in the North East Central African Republic in 2008 to protect refugees (see Modern History). Also in 2013, France deployed approximately 2,000 men in the country, Operation Sangaris, which, in collaboration with the UN force Minusca, would prevent militia and military from committing abuse against the population. In the spring of 2015, the French force was reduced to about 1,700 men.

Through the UN and international aid organizations, the international community has tried to prevent the country from collapsing completely. The UN force Minusca, which in 2014 took over from the African Union peacekeeping force, Misca, comprised almost 10,000 men in 2015, most from a large number of African countries. Its mandate from the UN Security Council is, among other things, to protect civilians, facilitate humanitarian operations and support the transitional government in its work to build a functioning state.

In April 2014, the EU sent a new force, Eufor-RCA, of about 750 people who took on the task of contributing to the stability of Bangui capital and its airport. When the Eufor-RCA was withdrawn in March 2015, its data was taken over by Minusca.

Up to September 1, 2015, three French soldiers and six Minusca members had been killed.

The reputation and mission of the foreign peace forces has been made more difficult by accusations in a UN report in spring 2015 against both French soldiers and members of Minusca for having committed sexual offenses against minors.

The recurring political unrest has led many Western countries to cut back on their diplomatic presence in Bangui.

Relations with several neighboring countries are problematic. Because of the Central African Republic’s inability to protect borders, conflicts have spilled over from neighbors into the country.

At the border with Chad in the north as well as Sudan and South Sudan in the east, it is often troubled. Relations with Sudan are tense as rebels from each country established bases in the other country’s territory, which triggered conflict in the border area. For example, rebels from Darfur in Sudan have fought the Sudanese military from Central African soil, triggering countermeasures into the Central African Republic from the Sudanese army.

At the border with South Sudan there are often screen savages with livestock keepers on the other side as a result of competition for water and pasture land.

For Chad, it is important that it is calm in the border area against the Central African Republic where an oil pipeline for export runs. Chad thus does not resort to drastic interventions in the neighboring country. Chad deployed troops in support of the now overthrown President François Bozizé, and Chad soldiers participated in the extensive fighting that ensued after the Sélé Movement took power in 2013 (see Modern History). Chad’s soldiers were initially defeated against Séléka, since they were originally President Bozize’s allies, but they sometimes also fought against anti-Balaka who saw the Chadians as Muslim enemies from abroad.

The Ugandan army has also entered the Central African Republic with fighting as a result. The Ugandan soldiers have been hunting for the Ugandan guerrilla Lord’s Liberation Army (LRA) that has ravaged the northeastern part of the country. The hunt must have been partly done in collaboration with the government in Bangui. However, relations with Uganda should have deteriorated since Bozizé was overthrown in 2013. In April 2017, Uganda announced that the LRA was no longer a threat and that the country would therefore take home its forces from the Central African Republic.

The country’s occupational army and police forces have almost been disbanded in recent years’ fighting and the militia have seized military weapons and other equipment. However, a smaller force remains in the capital of Bangui. In the past, the military and police together comprised 8,000 men.

Militants and other irregular forces count up to 11,000 men, including mercenaries from Chad and Sudan.

At a meeting of representatives of the armed groups in May 2015, most of them agreed that militia members should give up their weapons or join the new army to be built with international assistance.

In the summer of 2018, a new peace agreement was signed with Russia, which provided both the Central African Defense Force with light weapons and who would also train its soldiers (see Calendar). Concerns were raised at the same time that rebel groups, fearing that the government army was planning an offensive against them, were about to arm themselves, through weapons purchased from Sudan.

In August 2018, the UN Sanctions Committee said no to allow Russia to send more weapons.

Uganda’s army confirms that it is chasing LRA rebels in the Central African Republic.

The LRA’s attacks create concern in the border area

Attacks by Ugandan LRA create concern in the area around the Congo-Kinshasa border and Sudan.

One million people are affected by the violence

The UN states in a report that over a million people have so far been affected by the violence in the Central African Republic.

New rebel group in the north

A new rebel group called the Patriotic Association for Justice and Peace (CPJP) announces itself by taking on the city of Ndélé in the north.